Practicing What I Preach 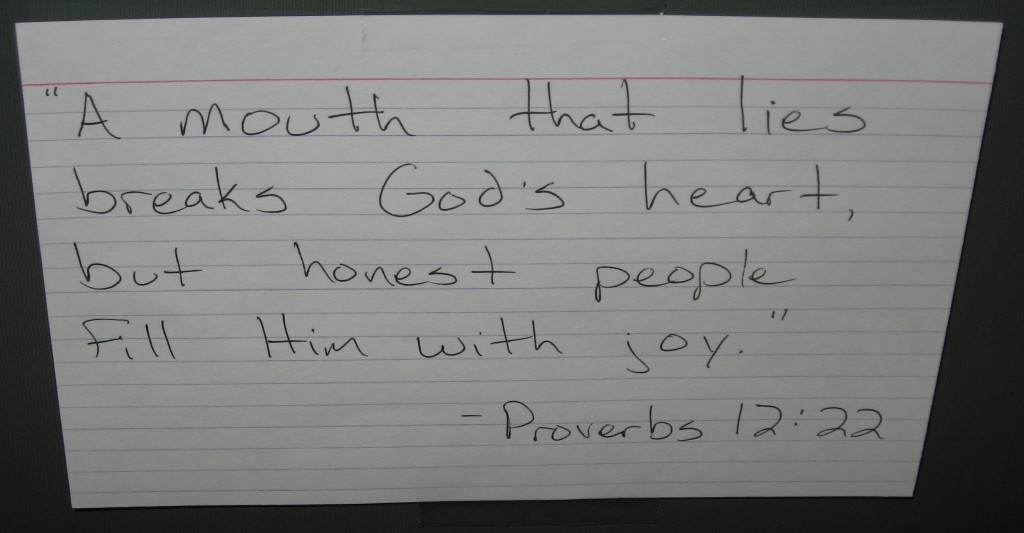 This is the picture that was taped to our TV set all day yesterday.  “How did it get there?” you may ask.  Here’s the story…

Just before bedtime on Wednesday evening, my six-year-old son lied to my wife and me about something.  It was one of those easily detected, bold-faced, I don’t even see the reason for lying kind of lies.  So I called him on it immediately and informed him he would not have any TV privileges all day the next day.  I even had the audacity to include all screen-time (computer, movies, etc) in this TV ban, and didn’t even bother to explain that to him at the time.  I’m a parent – I can do that.  Shep’s immediate response was to begin crying and run to his room to let out his steam and then cool down.  I was actually quite pleased with the way he handled that.  (Note to self – be sure to tell him how pleased I was with how he handled the delivery of the punishment.)

While he was finding a way to accept his misfortune, I located a verse of Scripture that I thought would really emphasize the key point(s) we want him to learn: God is displeased with him anytime he lies, his mother and I are displeased with him anytime he lies, and life will be worse for him anytime he lies.  As I have done with previous memory verses for my son, I looked up the verse in several versions and then synthesized them into a wording that I thought would best convey the message to him at his present developmental level.  When he came back in the living room a half hour or so later, I told him to go over and read to me the new memory verse that was taped to the TV screen.  At first he was focused on the mechanics of reading, but then the message hit him.  He stopped in mid-sentence, told me he hated that memory verse, and sat down in a huff.

At this point my wife and I made clear to him that one of the things we appreciate about him is that he shows consistently honest character, and is not one to lie often.  However, we want him to remember this lesson, and so here is our way of helping him remember.  So my lad spent the day without the pleasure of his pal, the television screen.  He survived the ordeal just fine, and even managed to successfully play by himself for about an hour while my wife was away from the house and I was out mowing the yard.  He tried to convince me to let him watch TV last night, but I held my ground, and he clearly knew the reason.  He even made a comment that showed how he understood that he could have been honest the night before, and how that would have changed things for him.  I think he got the point.  I only wish I could have been there this morning to see him get up and tear that obstruction off the TV screen so he could watch another round of Phineas and Ferb before starting back to school next week!