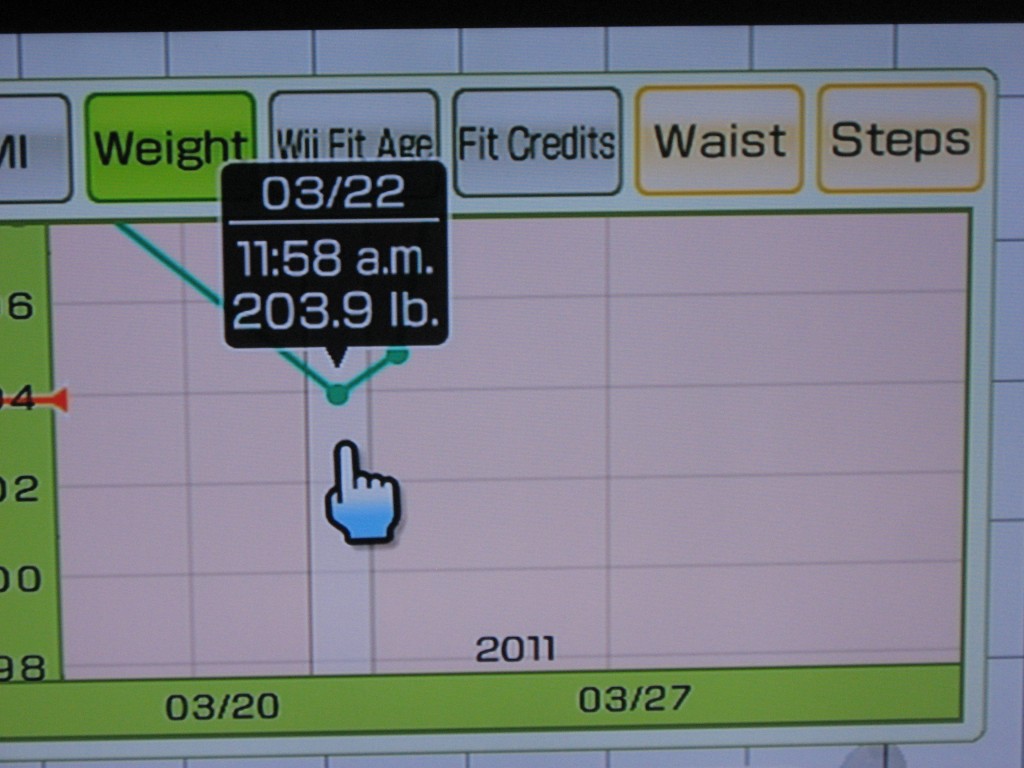 This was my most physically fit point of last year.  I don’t have an updated Wii Fit screen shot to show you today, but it is in the neighborhood of 240 (Don’t even start me on what happens to my Mii when I get on the balance board!).  Here is a brief account and analysis of what happened with my physical fitness last year…

I decided some time in late December that it was time to surrender my appetite fully to God.  I knew this would be the most important foundation to any approach I took to improving my physical fitness.  I still believe this to be true.  In December/January, I began a two part (“Eat Less, Move More”) process to weight loss that burned off nearly 40 lbs in 4 months.  I began eating homemade fruit smoothies as meal and snack replacements, and I began working out for an hour a day (sometimes twice a day) on our elliptical machine at home.  I’m sure there were some other nuances, but that is the core of what I did.  It worked, but it was too extreme to be sustainable for me.  And so it didn’t stick.

Three things happened at the same time that interrupted my rhythm, and because my rhythm was so hard core, I have never regained it.  1. I got a plantar wart.  Very painful.  Not fun.  Incredibly disruptive to my workout rhythm.  2. I started P90-X, thinking I would have a workout partner, but without being sure our schedules would really line up.  Given my personality, the elliptical machine makes for a great solitary workout.  P90-X makes for a great workout buddy exercise.  This further interrupted my flow.  3. I did the “Plyometrics” workout on P90-X and gave it everything I had.  I could barely walk for the next three days.  Literally.  I was in agony.  The culmination of these three dynamics was more than my workout rhythm could overcome.

Rather than aiming to lose X number of pounds in the next few months, I am aiming for being under 200 pounds in three years and five years and ten years.  I am going for moderate, consistent, and sustainable.  Here goes…

p.s. – I will also probably have smoothies sometimes for breakfast and/or lunch, but not as a rigid rule.  Also, if you are wondering how I make my smoothies, here goes.  I have a smoothie blender that makes basically one large (XL maybe?) smoothie.  Don’t remember the name.  Don’t know the volume.  Oh well.  I put a fresh banana in first, then top that with Dole frozen mixed fruit until it is almost to the top.  I usually sprinkle in some ground flax seed.  Then I fill it up with unsweetened almond milk and sweetened coconut milk.  Blend that sucker up and I’m good to geaux!