…and a little child will lead them. 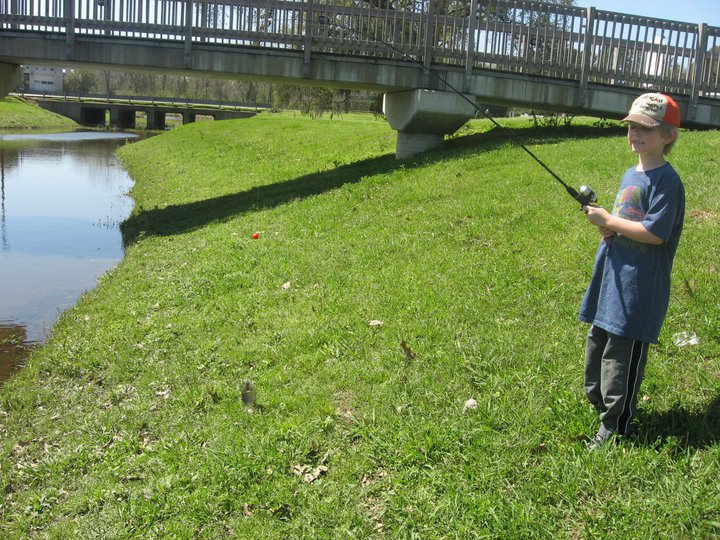 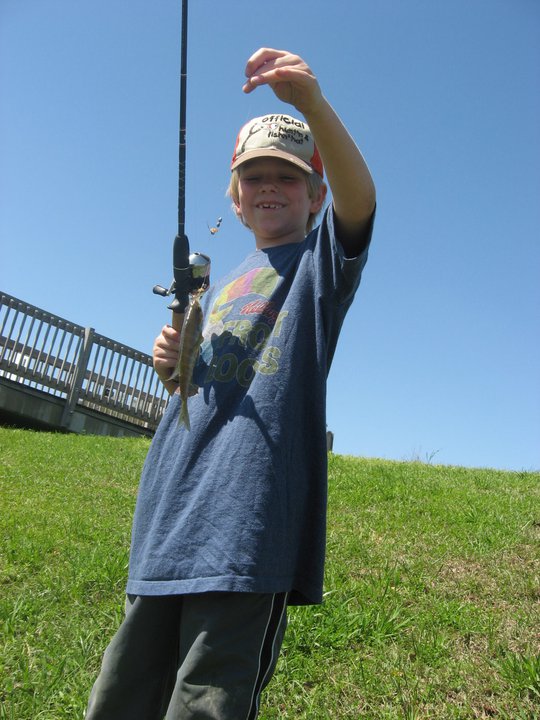 These images represent joy.  They are snapshots of diligence and reward.  But most importantly, they are pictures of faith in action!

Yesterday, I took Shep on a fishing “trip” to the local YMCA catch and release pond, where I hoped to share a couple of hours or so of good father-son bonding.  I suppose my three goals were to: 1. enjoy time with my son, 2. face my fears of inadequacy and clumsiness at outdoorsy stuff, and 3. help my son gain some knowledge and skill in fishing, so he can do more of it and enjoy a good thing that was largely missing from my childhood.  As it turns out, God had a far more important goal for these two fellas: TO GROW OUR FAITH!

My first challenge was walking into the bait and tackle shop.  I felt totally intimidated and out of place; as though I had a neon sign over my head that said, “Look at clumsy idiot who is pretending to be a man, but knows nothing about the ways of the Louisiana Sportsman.”  But, praise God, I received the grace and courage to march right into that testosterone-land with my son, show him around the store while we waited for the clerk to get free, and then ask the Manly Man if they sold live bait.  (I had been told worms were a good choice for where we would be fishing, and I remembered crickets were supposed to be another good choice.)  He didn’t seem to pick up on my fear-scent, and very respectfully sent us to the nearby live bait shack, where I proceeded to buy five bucks worth of crickets and nightcrawlers.  So far, so good.  Thank you, God for helping me grow up some more as a man and lead my son.  Now, time to hit the fishing hole!

We parked the truck close to the pond, grabbed our gear, and found a nice spot on the bank where I thought the bass would enjoy dining on the lunch we were prepared to offer them.  For about the first five minutes, I worked with Shep on his casting skills.  I did a fairly good job of balancing showing, watching, coaching, helping, and remaining silent.  Not an easy balance for me – I don’t know about you.  After that, he spent another five or ten minutes enjoying showing off his new casting skills as we watched in anticipation for that red and white bobber to dive under the water.  Not even one nibble, despite the tantalizing splashing of fish here and there around the pond.  He then decided I could take over the fishing, while he set out to smooth a strip of grass from the top of the hill down to the bank where I stood – rolling and tumbling down over and over like…a seven year old boy.  Then, in about five minutes, came the comment I had been dreading…

The Holy Spirit then prompted me to suggest we pray for God to send us some fish.  I know.  I know.  Many a fishermen over the centuries has prayed for fish, only to come up empty handed.  Maybe I was asking for trouble.  I just knew I wasn’t ready to give up on our day, I believe turning to God for help in ANY situation is always the right thing to do, and I wanted to use this mundane life experience as another lesson to point him to our Father.  He asked me if God would really do something like that – send fish to us, just because we asked.  I told him that Jesus once told his friends where to catch a whole boatload of fish after they had been up all night with not one fish, so this was definitely something God had done before.  So he joined me in a simple prayer of thanking God for the beautiful day and asking Him to send us some fish.  I was TOTALLY unprepared for what happened next!  (Totally revealing my need to grow in my faith.)

Shep says, just as matter of fact as you please, “Dad, God is telling me we should go over to that dark water by the bridge.  He is telling me that’s where the fish are.”

I almost laughed, but instead said, “Well, son, I think we should listen to God and do what He says.  Lead the way!”  Shep marched along the bank toward the bridge.  “Okay, son, I think this is close enough.”  “No, Dad.  God said the fish are over THERE!” “Okay, son, let’s do it God’s way.”  We finally reached the spot, and I put another cricket on the hook for him.  At this point, I have to tell you, I never even considered the faith-disappointment it would have been for him if we encountered no fish after praying and obeying.  That didn’t matter.

He threw a perfect strike at the shadowy shallow in the lake where God had directed his young eyes and heart.  WHAMMO!!!  Down went the bobber in ten seconds!  “Go!  Go!  Go!  Go!  Go!,” I yelled in encouragement.  And the pictures above are tribute to the incredible gift of God that followed.  We caught over a dozen fish (well, some were repeats, but that’s cool) together, with Shep catching most of them.  And as amazing as the gift of fish was, it was a trifle in comparison to the gift of faith God gave us both.  Especially me.

God, lead me to the childlike faith of my son.  Teach me to not only talk to you about everything in life, but to LISTEN FOR YOUR LOVING GUIDANCE.  Forgive me of my unbelief and my pride of self-sufficiency and my foolish ways of trying to fit you in a tidy little box.  And thank you for the gift of my son.  The two of you amazed me yesterday.