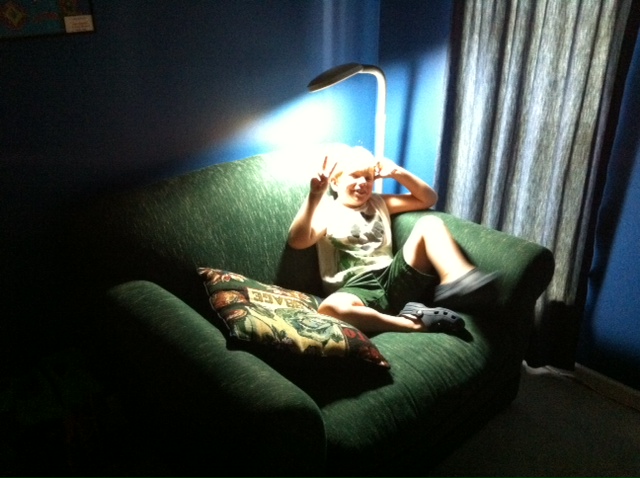 Here’s Shep – enjoying his new “big boy” room for the first time.  A fresh coat of blue paint (what I’m calling “Rubbermaid Blue”) picked out by him and a new comfy lounging/reading chair have transformed his space into something fit for…well, a big boy.  How he got here was a good life and faith lesson for me.

He has been asking us for a while if we would paint his room blue.  Chemaine and I readily agreed, then promptly moved on to other things.  Life gets busy.  You know how it is.  Priority for him.  Not so much for us.  Finally, he prevailed upon us a month or so ago to go to Lowe’s and pick out paint.  She and I picked out several colors of blue that we thought he would like, and we could live with, then presented them to him for his selection.  He went with “Classic Blue.”  He’s old school like that.  We bought two gallons of the good stuff, then promptly moved on to other things.  Blah blah blah.

While on vacation last week, we decided to surprise him by letting him stay with his Nana on the night of our return, and we would paint his room for him and move in the cool Big Green Chair while he was away.  Only one thing stood in our way of fulfilling his desire for him – his room was a total wreck!  Just the week before vacation, one if his buddies spent the night and told us he loves coming to our house, because Shep has so much stuff.  He was delighted, but it gave us much food for thought.  Anyhow, no room makeover was going to happen without a massive cleanup of toys and other 7 year old boy room debris.  Massive cleanup.

“Shep, before you can go to Nana’s house (he loves going to Nana’s house), you have to clean up your room.”  *Groan*  *Grumble*  (He hates cleaning up his room.  He’s a 7 year old boy.  Nuff said.)  “We’ll help you, son, but you have to work and do your share.”  “…okay…”  (with hesitation and some sighing and moaning)  And the three of us proceeded to tackle the Cleanup together.  He really did work hard, with a fairly good attitude, and he even volunteered several items to give away to other kids.

Off to Nana’s for him.  Off to the store for a few additional supplies for me.  Taping, taping, taping for my wife.  And several hours later – it was finished.

When he returned the next morning and we showed him his new Big Boy Room, he basically spazzed with delight.  Actually collapsed on his bed with speechless, 7 year old boyish, exuberant glee.  It was glorious.  And it happened because he was willing to trust and obey, in a way he would much rather avoid.  He didn’t know what the reward for his hard work would be, even though we knew and could already see this moment of delight days before it actually happened.  But he trusted and obeyed.  He endured the temporary hardship of some unpleasant work and sacrifice of other much more enjoyable activity.  And he was rewarded richly.

God wants to do so much more with your life and mine than just paint it up nice and give us new stuff.  He wants to bless us beyond anything we could ask or imagine.  And He is already delighting in the moments of our receiving those blessings, before we even get there.  Will we trust and obey Him when life seems hard, unpleasant, and senseless to us?  I, for one, really want to find out what kind of Big Boy Room He is preparing for me…