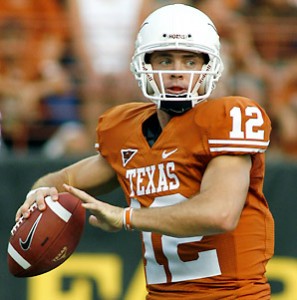 Colt McCoy – hats off to you, brother!  Folks, you’ve got to see this minute and a half interview!  For those who aren’t aware, Colt McCoy was a Heisman runner-up for the last two years, and one of the most outstanding quarterbacks ever to play college football.  His Texas Longhorns played an impressive undefeated season and clearly earned the number two spot to play against the Alabama Crimson Tide for the national championship last night.  In the very first series of Texas downs, he took a hard hit to the shoulder, which apparently caused some type of nerve injury that was significant enough to sideline him for the entire game.  This resulted in the freshman backup QB playing the entire game.  No one knows how the game would have gone had McCoy played, but the Longhorns lost to a fairly dominant Alabama team, despite an impressive rapid buildup of poise and confidence in Gilbert, the green QB sub.

Given all of that, listen to the humble, steadfast words of this incredibly talented young man of faith: