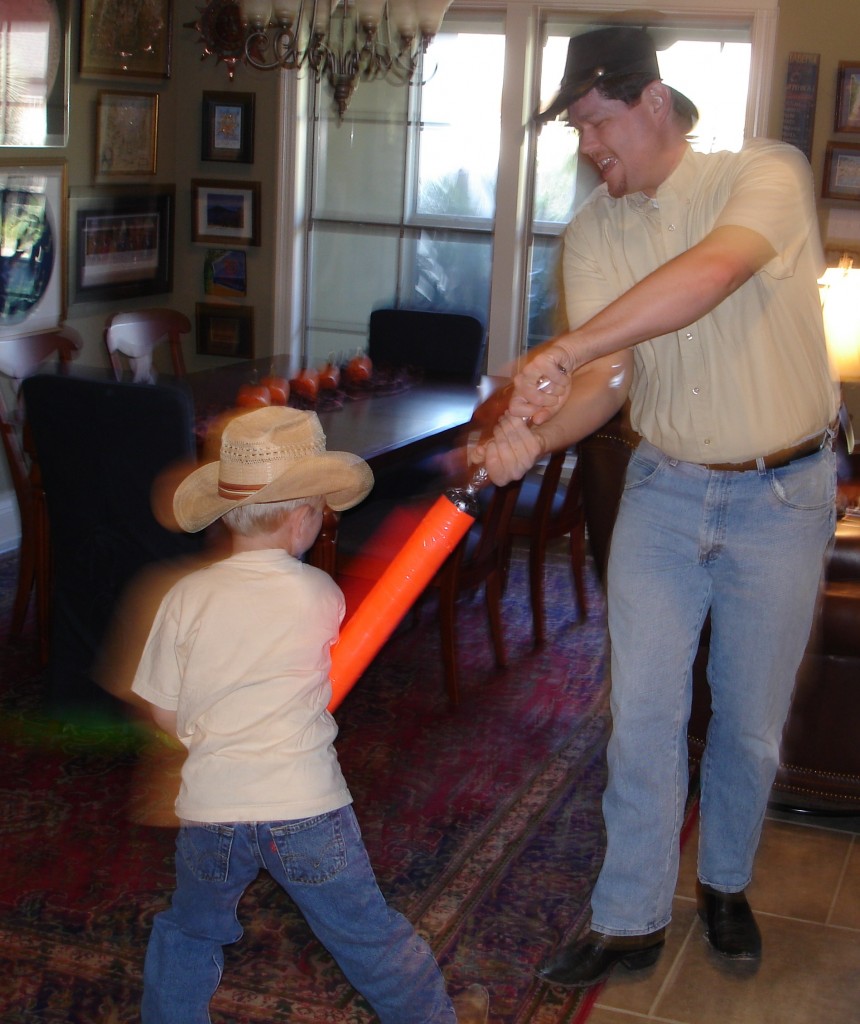 My six year old had his first sleepover party this week.  The original guest list had four of his buddies from school coming over for the mayhem.  Only two made it.  If felt like a whole army!

Please don’t misunderstand.  I am not complaining.  It was a blast, and I thoroughly enjoyed being an active part of the melee.  Without having made any grand plans beforehand, the central theme of the evening quickly became evident – BATTLE!  The teams and individual competitions shifted continually as the warfare raged on.  Plastic swords.  Electronic guns.  Click guns.  Holsters.  Foam battle axe.  Foam war hammer.  Shields.  Direct attacks.  Sneak attacks.  Gang attacks.  Team attacks.  Disney World “light saber.”  Homemade battle-ready light sabers.  Marshmallow guns.  Even balls on the trampoline.  It was all about who was best equipped and who was delivering the best attack.

For all the fun I had both watching and participating in the bedlam, my favorite moment came when my wife wanted to get the boys’ attention before “bedtime.”  She was trying to talk to them, but they could not overcome the distraction of their weapons enough to listen.  So she told them to lay their weapons down on the TV tray by the chair where she was sitting.  What a pile of plastic munitions!!!  I wish I had taken a picture.  It was all I could do to keep from busting out laughing.  But “Ms Chemaine” was in serious mode talking to the boys, and I didn’t think it wise to cut up at that particular moment, so I summoned all of my strength and silently reveled in the sight.

Here was the thought that came to me so clearly, and I have been thinking about it ever since:

Males are made for battle!

Guys, isn’t that still part of your deepest desire?  Whether you show it outwardly, or not?

So, here is my thought for the day, and I won’t belabor the point: We men were wired for battle, and we basically have three choices as to what we will do with this nature.  We can hide from it and suppress it one of many ways.  We can turn our warriors loose on a misguided campaign that ultimately will lead to damage.  Or we can surrender our soldier-natures to the High King of Heaven to fight the Enemy and stand for righteousness according to His battle orders.

Brother, what battle are you fighting today?  Whose campaign is it?