Is it Wednesday yet? 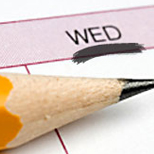 It is so important that we honor our word by following through on our promises.  The more we grow as people of integrity and consistency, the more respect we tend to earn from others along the way.  And this is certainly true with our children.  Whether we have promised them a reward, a punishment, or just a trip to Wal-Mart (I’ll let you decide which category fits that one), our authority in our children’s lives grows as they experience us doing what we say we will do.

But it isn’t always easy.  Is it?  For many parents, it gets really tough when we have told our child they will suffer a particular consequence for misbehavior, and then it comes time for us to enforce it.  And they are now acting so sweet and repentant.  Or they came really close to stopping the behavior wherever we drew the line.  (“One, Two, Two and a Half, Two and Three Quarters, THRRRRRRREEEEEEEEE…”)  Or we realize that enforcing the punishment will be an inconvenience or a drain for us.

Yes, it get’s tough to carry through on punishment at times.  But when the going gets tough, loving parents get going.  If we aren’t willing to enforce our word with our kids, how do we really expect them to learn self-discipline?  And folks, facilitating the growth of self-discipline in our children is one of the most rewarding gifts we can possibly give them.

So when my son took an increasingly disrespectful tone toward my wife on Sunday night, we told him he would immediately lose the basket of toys in front of him, as well as his new favorite video, for a day.  And when he persisted, after being warned of the consequences, he was told he had just lost them for two days.  At this point he wisely shut his mouth and marched to his room for some self-imposed cool-down time.  Several times yesterday, he really applied the pressure to us by telling us how very sorry he was, and how he had learned and would be nice from now on.  We thanked him for his new attitude, told him we were glad he had learned his lesson, and reminded him he would get back his toys and videos on Wednesday.  At which point he wigged out and stormed back to his room.

No penitent vows of respectful living for life from the lad today.  Because Chemaine and I passed his tests yesterday by not going back on our word, he is realizing there are real consequences to misbehavior that aren’t too pleasant to suffer through.  He calmly asked me in the garage this morning, “Is it Wednesday yet?”  And when I answered, “No, today is Tuesday.  But tomorrow is Wednesday,” his face lit up and he beamed, “Thanks for telling me that, Dad!”